On January 1, 2016 by Chad Stuart With 2 Comments - Blogging the Bible, Uncategorized

Before I begin with my official blogging of today’s reading, I want to let you know these blog posts are not going to be of sermonic quality…maybe you want to leave now? What I will be writing in these blogs is what touches my heart, my mind. What questions I have. You’ll find sometimes I won’t have the answers to those questions, and if that bothers you I apologize. Basically what I’ll be blogging are the thoughts that I’ve written in the margins of my Bible like this: 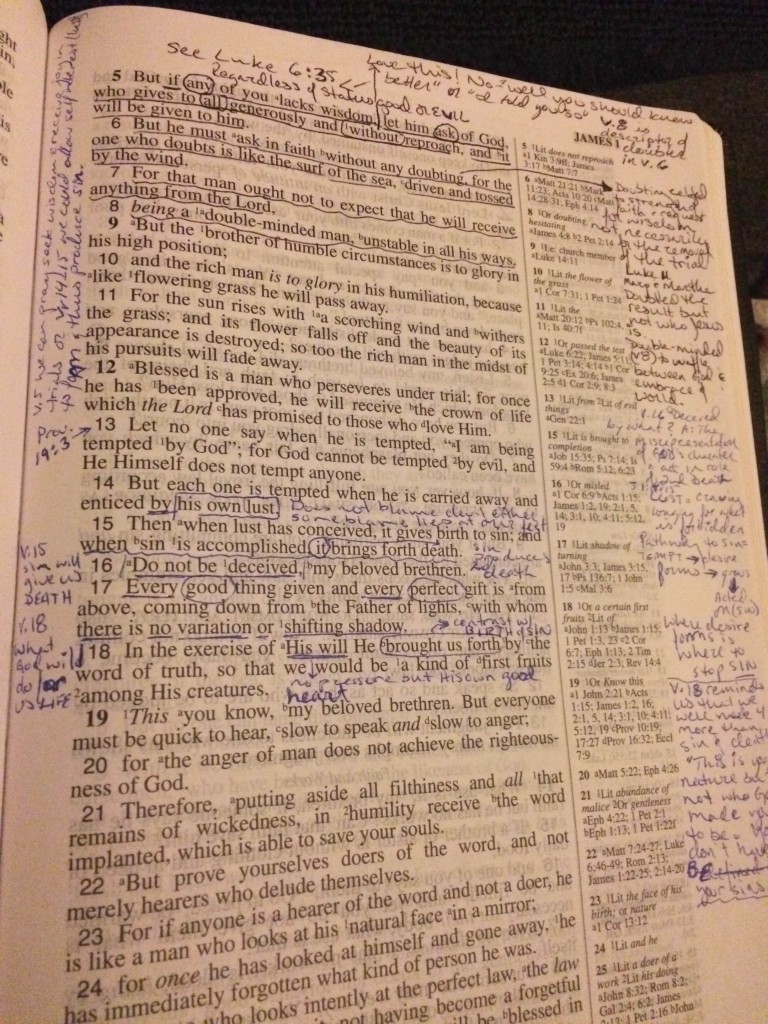 For those of you that may be wondering, I am doing my daily devotions primarily in the New American Standard Bible but I also have a New Living Translation (they call it a translation, though I would say the word “translation” should be used loosely in regards to the NLT), I am not necessarily a fan of the NLT for exegetical study…I haven’t actually read the NLT since I was a Senior in academy…but I am using it because this edition of the NLT uses not only red letters in the New Testament, but also blue letters in the Old Testament to highlight references to Jesus or texts related to something Jesus did or said in the New Testament. I really love it and am glad one of my elders told me about this “Jesus Centered” Bible.

So here we go…If you’re still with me up to this point I hope you’ll join me all 365 days. Oh and please comment on these posts if you so desire. Keep the comments kind and kosher. Comment on the text not at the individuals that may also comment please…

Romans 1:12 is a beautiful reminder of one of the great purposes of the church and why no one should think being a loner Christian is truly productive. Paul wanted to connect with the Roman Christians so they could be encouraged by him and he by them.

The doctrine of a literal 6-day creation and God/Jesus (John 1) as creator is being attacked. I believe it is because the devil knows that God’s creation reveals “His (God’s) invisible attributes, His eternal power, and His divine nature (character)” (Rom. 1:20)…the saddest thing about these attacks, people within the church are assisting the world and thus assisting with the machinations of the devil. SMH. The Bible has a word for these folk, FOOLS (Rom 1:22).

Was Paul inspired to highlight these two sins because they aptly illustrate in their own manifestations the consequences of denying God as ultimate creator and thus our ultimate authority?

Idol worship in this context is actually worshiping something that is crafted…CREATED…by the hands of men. Making man the creator and thus all powerful, thus the authority.

Same gender sexual relations denies the creative power that God gave us and is an attack against what is the pinnacle of the sixth day of creation (Genesis 1:27; Genesis 2:18-25).

I do not believe Paul was highlighting same gender sexual relations because it is a “greater sin” as some purport.

In fact it is almost as if Paul anticipated some would feel this way…so then he lists, while not highlighting, but he still lists a bunch of other sins. A list that includes many sins I think we’ve all committed at some point or another: “gossiping (guilty), disobedient to parents (guilty), unloving (guilty), unmerciful (guilty)” and I’m sure we could throw in many others I’m guilty of.

And here is the real dagger for any of us that only want to condemn one of the two sins Paul highlighted Paul doesn’t just say the first two sins, idol worship and same gender sexual relations are worthy of death, v. 32 “that those who practice such things” Which things? All of the above and more I’m sure! “are worthy of death.” And wow this really hits me, by embracing certain sins and being okay with certain sins we embrace ALL the sins “they not only DO THE SAME, but also give HEARTY approval to those who practice them.”

Are we gossips? It is as if we had homosexual sex…yep that is how I read Romans 2:1, “Therefore you have no excuse, EVERYONE of you who passes judgment, for in that which you judge another, you condemn yourself; for you who judge PRACTICE the SAME things.”

This fits with James 2:10, “For whoever keeps the whole law and yet stumbles in one point, he has become guilty of all.”

But then Paul as if he would know that then people would say, “see, see, don’t judge me for my sin.”

Turns to that crowd and states, “do you think lightly of the riches of His kindness and tolerance and patience, not knowing that the kindness of God leads you to repentance.” (Rom. 2:4)

Paul here tells one group “if you deny your sins by judging others and not looking at your own you’re guilty.” To another group he then says, “If you don’t think you need to repent (confess and turn away from) as a result of the kindness and patience of God you’re guilty too.”

In closing what struck me during this reading is something I was convicted to do as I read Romans 2:17-29…maybe you’d like to do the same.

Every time Paul writes “Jew” insert the word “Adventist.” And then when I read the word “circumcision” I replaced it with the word “Sabbath”—though probably any doctrine that you know at times you judge others in you could put in there…that just happens to be mine.

Verses 28 & 29 of chapter 2 bring context to all the statements regarding law keeping in Romans 1 & 2.

If someone read all of this (Romans 1 & 2) and thought, “oh I have to work harder to keep the law,” they’d come to verses 28 & 29 of chapter 2 and realize if it isn’t out of a response from my heart…if it is just a rule…if it is just a law…if it is just about doing right to earn something…if it isn’t a response of my heart to the invisible attributes, the eternal power, and the divine nature of God then it is all for naught!

Blogging the Bible: January 2, Genesis 1-3Hold Me Accountable: Blogging Through The Bible