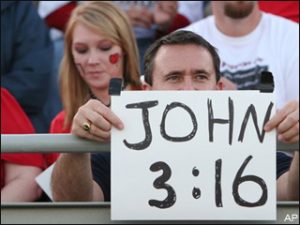 “For God did not send his Son into the world to condemn the world, but in order that the world might be saved through him.”
-John 3:17

I don’t see them as often as I once did, but growing-up watching a lot of sports I saw a lot of signs like this:

I don’t know how many people that saw these signs actually knew what they meant…but I went to church and church school so I did know it was a reference to the Bible and I even had that Bible reference memorized.

“For God so loved the world, that he gave his only Son, that whoever believes in him should not perish but have eternal life.” –John 3:16

Such a wonderful text. However, I wish more people would have memorized the text immediately following it and believed it as well. John 3:16 tells us that if we believe (more than just a knowledge), trust in Jesus we won’t perish we’ll have eternal life. But many in this world have chosen not to believe, trust in Jesus/God, because the God they were raised to believe in is a God that is looking to condemn, a God that sets up arbitrary rules and if you don’t follow those rules and live exactly “so” you will be condemned. And therefore people don’t believe. That is the story shared with me by a former Catholic now agnostic on my recent plane ride and I have unfortunately heard this same sentiment from many others throughout my life, and yes I have even felt the same sentiment in my own heart in the course of my journey. If only people would have shared the text immediately following.

The god they were taught about isn’t a true god, the god many were taught to fear and shirk from if they messed-up is a god with a little “g” he isn’t real. How do I know, because the real God didn’t send Jesus into this world as the perfect example so that we would feel bad about our blemishes, the real God is a God that isn’t looking to condemn. God did not send His Son into the world to condemn the world…

The message of Jesus and thus of God was never one of condemnation, it was always one of hope and a way out to a better place.

Do you struggle with condemnation in your life? Memorize John 3:17 and rebuke the devil because it is he, the fake god that condemns, not the ONE TRUE GOD.

“For God did not send his Son into the world to condemn the world, but in order that the world might be saved through him.” –John 3:17